As per usual since 2000, the citizens of Novi Sad and their guests rejoice at the end of each summer with the Street Musicians Festival, which brings the most diverse artists from the international and local scene to the city streets.

The festival does not only welcome artists whose street performances are their way of life, but authors who wish to assert their art through their desire and ambition. The idea not to divide artists between “street” and “established” arrives from our belief that art always belongs to the streets, regardless of the phase it is going through. Thus, the Street Musicians Festival is the only event that brings together world class musicians, and absolute amateurs all to one place! Since the start of the millennium the capital of Vojvodina has emerged on the map of annual gathering of street art, and has been visited by renowned international street musicians, as well as artists who perform at other prestigious festivals across Europe, and beyond. Thus, artists bring culture and the spirit of their native surroundings to the region, only to exchange it with the local population, and the artists they encounter, who truly appreciate street art.

The Street Musicians Festival was held for the first time in 2001. Since then, the festival has been organized regularly each year, every September, under the same principles of street art adopted during its first year. The old city center with its age-old streets and squares was made for such an event, while stages remained in the street – in line with passersby, seductively drawing the attention of entire generations. From its beginning, the program has been divided into two segments – the local and international scene. Since then, and to this day, the art director of the festival has been Aleksandar Carić, a household name on the international street performance scene. This son of Novi Sad has been living and working for years in Italy and Portugal, and is an active street performer himself, with a serious background experience behind him, working for these sort of festivals across the world. During the last 11 years, due to his contacts and artistic standards Novi Sad has welcomed numerous, renowned street artists from all five continents, including, among others Malabar, Voala, The Von Trolley Quartet, Perpetuum Jazzile, Etoiles De Essaouira, Cosmic Sausages and many more, together a selection of local representatives, as well.

Each year, the colorful lineup of the Street Musicians Festival brings to Novi Sad an ever larger number of tourists, both local, and international. The importance this event holds over tourism is also justified by the Tourist Flower Award, which the Tourist Organization of Serbia awarded the festival in 2007, for outstanding contribution to “cultural events in service of tourism”. Beside its many contributions to the development of tourism, the Street Musicians Festival also retains a strong role in shaping the identity of Novi Sad, and the development of healthy social norms and social cohesion. Because of its attractive program, and the great commitment of the organizational team, the Street Musicians Festival during its three days is attended by over 70,000 visitors each year, and ever since its foundation, the entire program has always been completely free. Tickets don’t exist because we believe art and culture belong to the streets and to everyone.

Simultaneously, in 2009, director and founder of the Festival, Borislav Beljanski, for his entire contribution to art and culture, and the organization of this event, received the prestigious award of the city –the City of Novi Sad’s November Charter.

During the last several years, the Street Musicians Festival has been organized by the Art Association “Inbox” from Novi Sad, which expanded the initial concept of the event, adapting it to modern business and communication tendencies in art and culture of the 21st century. 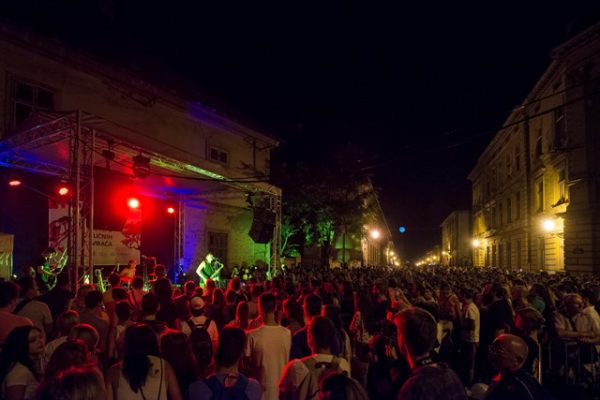 After 15 years of organizing the festival in the center of Novi Sad, in 2016 we decided to start an initiative to candidate the Lower Town of the Petrovaradin Fortress for a position for which it is suited – the position of a natural extension of Novi Sad’s city center. Since then, the festival has taken place at a new location, striving to get even closer to its basic goals: uplifting the streets and city public spaces that represent a valuable architectural heritage, and also decentralizing the city’s cultural offer and making a special cultural contribution to the local community.

By moving to a new location, the festival offers artists, visitors, local residents, and the city in general a chance to actively take part in the creation of a new and urban environment, a kind that we all want and which is, above all else, necessary to us.

For decades we have been facing a problem: we pass through the Lower Town only to reach the Petrovaradin Fortress. However, it could be completely different! We can imagine the Lower Town as an elegant little Baroque town on the bank of the Danube, with a spirit and ambience that still preserves, nurtures, and reflects the time when it was created – the early 18th century. The mere sight of its snug, picturesque houses with their ornamented facades, its narrow, cobbled streets, the beautiful church at the foot of the monumental walls of the fortress, and the renowned Belgrade Gate, provokes a romantic feeling, and thoughts of art and adventure. It could become a meeting place for artists and those who practice old crafts, a place toward which sophisticated gourmands gravitate, where new loves are born, and first photographs of kids chasing pigeons are taken, where tourists flock not just to climb to the fortress, a place that inspires songs.

In the meantime, the festival has grown and adopted a completely new concept, which we call Gradić Fest. It represents joining of the forces, knowledge, experience, ideas and infrastructure of the Street Musicians Festival with those of likeminded partner organizations, such as Cinema City film festival, Pop Up (Berberaj & Public P), Scenatoria, Suburbium, Fruškać, Happy Trash Production, Ugrip and AAA festival. The idea of joining forces was born when the Street Musicians Festival relocated to the Lower Town and the festival’s initiative was joined by a big number of associations, festivals and individuals who wanted to participate in the revival of this locality, which had been neglected for years. 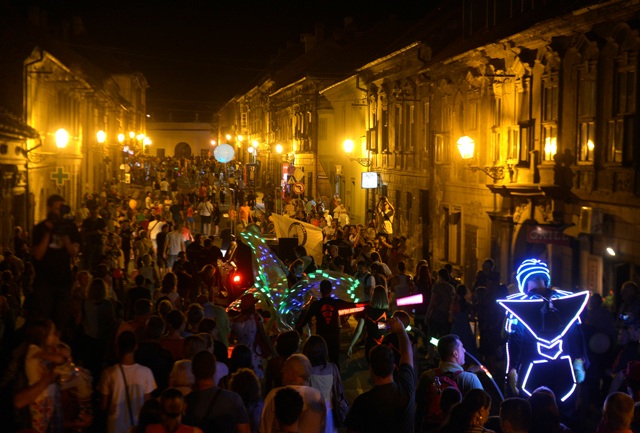 The vision of the Lower Town in Petrovaradin as an exciting artistic and tourist quarter and as a natural extension of the pedestrian zone of Novi Sad’s city center will once again become reality during three-day Gradić Fest, when music, film, art and entertainment will all come together on the streets of the Lower Town. Like the previous years’ programs, this year’s program will also include performances by artists from Serbia, the region, Europe, America and from other, distant countries, and it will consist of music performances, art performances, ambient theatre plays, film and video projections, art installations, interventions in space, but also workshops, conferences, lectures, organized tours etc. Gradić Fest will take place at the following locations: Beogradska Street, Lisinskog Street, Vladimira Nazora Street, Štrosmajerova Street, Trg Vladike Nikolaja Square, Rampin put (the path that goes down form the Institute for the Protection of Cultural Monuments of Vojvodina to the steps of the Petrovaradin Fortress) and green spaces behind the Belgrade Gate.

The main wish of the organizations gathered around Gradić Fest is for us to build a new festival together and be a part of an entirely new, urban and artistic story.

We are the ones who build our city, because we live in it!